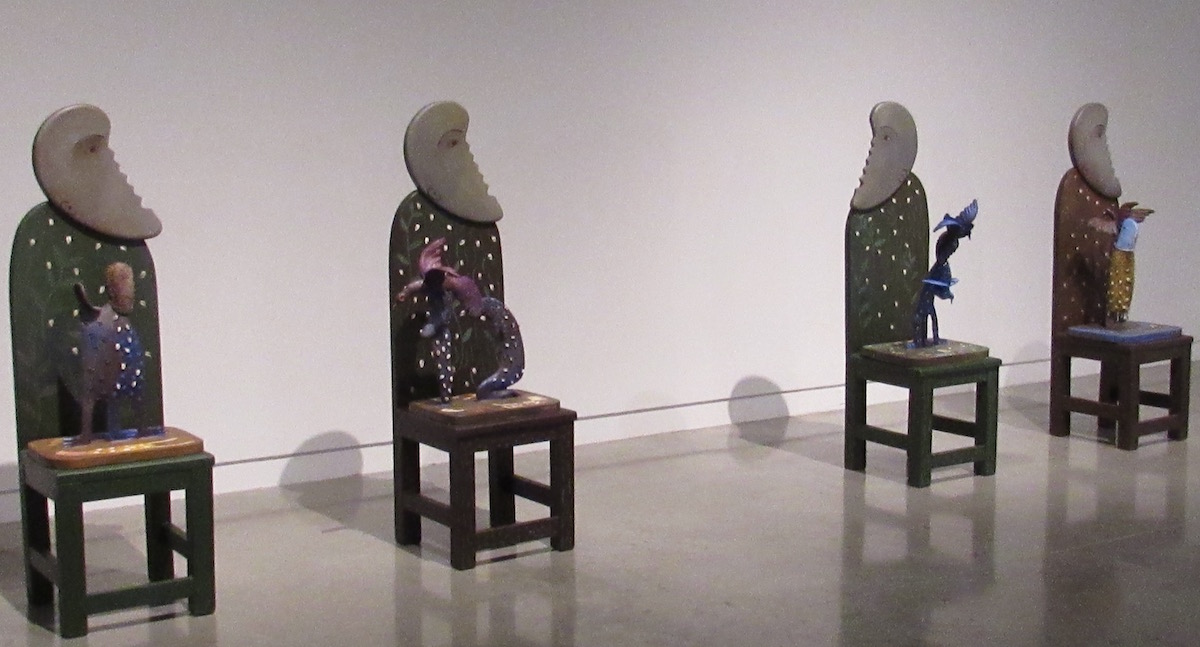 Manuel Mendive’s Nature, Spirit, and Body—his first solo show at a New York museum—has opened at the Bronx Museum of the Arts.

The show introduces New York audiences to two suites of paintings and sculptures that premiered this spring in the acclaimed Artes de Cuba festival at the Kennedy Center in Washington, DC.

The immersive installation Fragmento de un paisaje / Fragment of a Landscape (2017) includes paintings and also sculptures, in the form of four low chairs and a ladder.

The second suite of works, Paisaje desarraigado / Uprooted Landscape (2018), is a set of three towering, cylindrical sculptures that are viewable inside and out. The first greets visitors in the museum lobby, next to the café.

In the show’s artworks, Mendive continues his exploration of African oral traditions and their influence on Cuban art and culture.

“It’s the idea of creating a visual lexicon for a wisdom that is based on orality,” said Bronx Museum curator Christine Licata, who organized the show. “There’s a famous Yorùbá saying: ‘Until the lion gets a historian, the hunter will always be the hero.’

“For me, Mendive is the historian for the lion—and for the cradle of civilization that is Africa.”

The cowrie shell is one visual motif that appears throughout Nature, Spirit, and Body. For many cultures in Africa, Ms. Licata said, cowrie shells are considered “the mouth of the divine,” and often used in divination rituals. “You’ll see cowrie shells within the paintings, on the sculptures,” she said.

“You’ll also see that these faces are half-cowrie shells.”

The ladder is another recurring motif—a symbol, Ms. Licata said, of the passage through life, and between life and death. The peacock, an animal associated with Yemayá, the Yorùbá goddess of the ocean, also appears in several works.

Mendive “creates a world of total equity,” said Ms. Licata. “Clouds are birds are people. Trees are people that are birds.” In Mendive’s vision, that equity is an energy that connects us all.

Ms. Licata also pointed out that, although Mendive received rigorous academic training, he is sometimes mistaken for a folk or naive artist—“because he keeps everything on a single perspective and plane,” she explained. “But again, that’s all part of his conceptual work—that it’s an equitable universe.”

Mendive’s work in performance art is a holistic expression of this vision, she added. “They are canvas, they are painting, they are movement, they are emotion—everything that goes into all of his works, but through the body.”

The exhibition includes groupings of images by Mendive’s longtime collaborator, photographer John Rowe, which document a performance that took place in a Cuban rain forest.

Directed and edited by Daniel Diez, Jr., it weaves together performance footage, images of the natural world, and Mendive’s artworks in settings that include fields, forests, and stones under water.

Manuel Mendive: Nature, Spirit, and Body runs through November 4 at the Bronx Museum of the Arts.