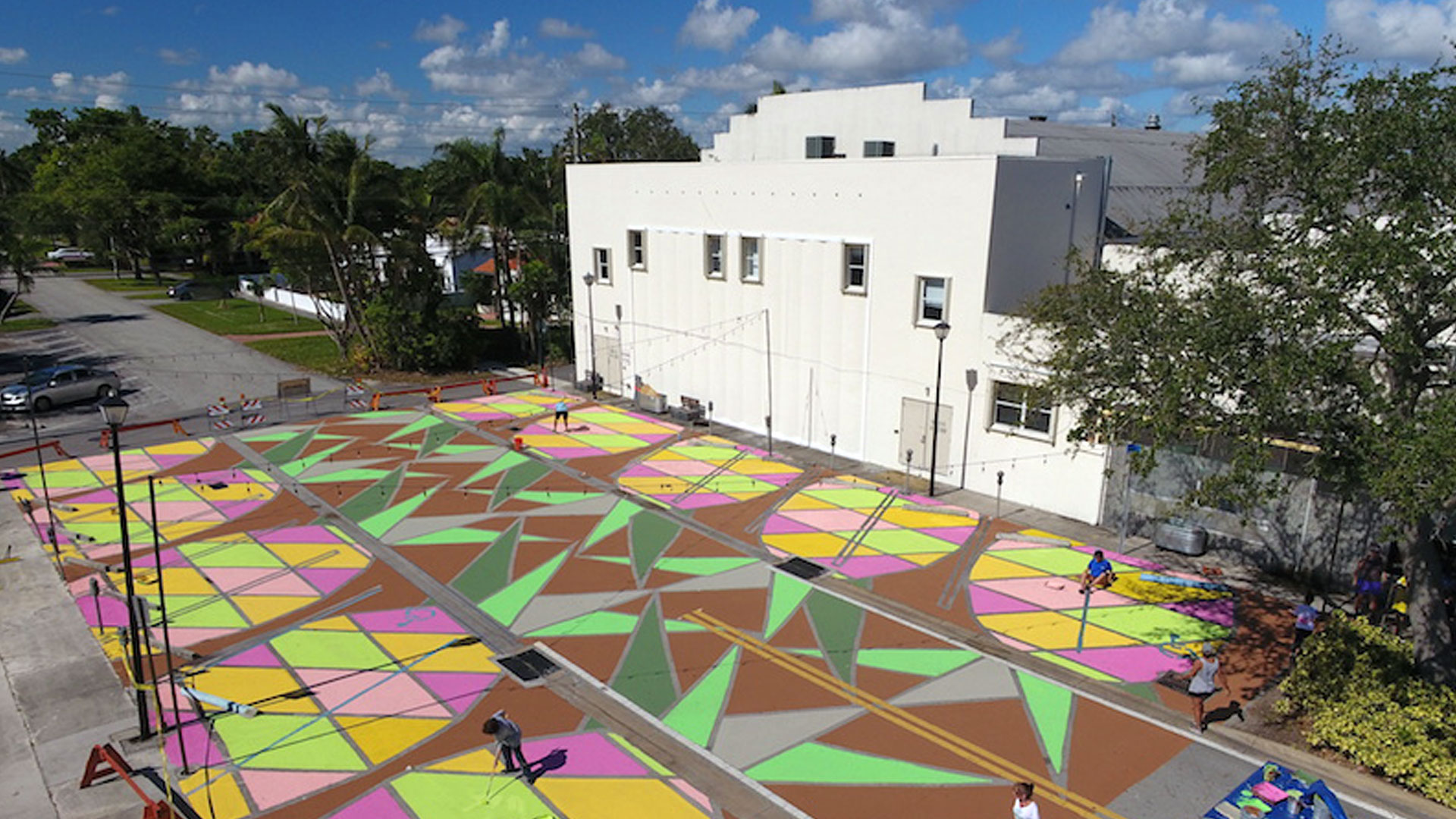 Winner of the 2017 CINTAS Prize in Architecture & Design, Anthony Garcia is a principal of Street Plans Collaborative, an architectural practice that specializes in transportation and open space planning, with offices in Brooklyn and Miami. As a writer and advocate, Tony advocates for an urbanism centered around walkability, public transit, and bicycle infrastructure.

With his Street Plans Collaborative partner Mike Lydon, Garcia was awarded the 2017 Seaside Prize for leadership in contemporary urban development and education. They are the co-authors of Tactical Urbanism: Short-term Action for Long-term Change (Island Press, 2015). A part-time adjunct faculty member in the University of Miami School of Architecture, García is the former chair of the Green Mobility Network, the largest bicycle-pedestrian advocacy organization in South Florida, and founder of the Ludlam Trail project. Here, he speaks with architectural conservator Rosa Lowinger of RLA Conservation of Art + Architecture.

Congratulations on winning the CINTAS prize. Let’s start by talking about the work you do. What’s tactical urbanism?

My philosophical background is as a New Urbanist, which is all about acknowledging that the suburban sprawl model of developing cities is one of the major causes of social, environmental, and economic problems in our society. New Urbanism promotes traditional, compact, walkable urbanism as an obvious alternative.

Tactical Urbanism is one of the intellectual descendants of New Urbanism. It has four basic qualities:  It’s inexpensive to carry out, it uses temporary materials that can either be removed or don’t last for ten years, it’s based on existing plans—which differentiates us from guerilla urbanism—and it involves citizens in the creation of the infrastructure.

A high-profile example of this took place in Times Square [in New York] on a Memorial Day Weekend [in 2009], where the city closed the square using their own internal traffic cones and bollards and set up 1,000 chairs bought from K Mart. They intended to do a weekend-long test, but it was so successful that it remained closed.

Since then, Times Square has been closed to traffic. They’ve collected figures on retail sales, which improved by 30%, and safety improved also.

We like to say that if they had hired an architect first and spent a million dollars to do a study, we would still be talking about the renderings rather than how great it is to be in the space. That’s the disruptive power of tactical urbanism. That’s what we do.

What are some of your other projects?

In Miami-Dade County, we’ve developed a program in partnership with the Department of Transportation and Public Works called the Quick Build Program. It’s a program where people apply for funding and technical assistance to create bike lanes, crosswalks, and other transportation improvements.

We got grant funding and are using that money to build short-term, low-cost projects solicited through a contest done last year. One of the projects we’ll be building is a shared space on 3rd Avenue between 29th and 25th in Wynwood, where we are painting a consistent pattern on these blocks to narrow the street and widen the sidewalks.

Another Quickbuild project was called Plaza 98, in Miami Shores. Together with a group of community members and former Mayor Alice Burch, we painted the ground on 98th Street with a mural, to create a central plaza for the village. Once a month they do programming in that space.

A lot of the projects overlap with the idea of creating art on street surfaces.

Tell us about your CINTAS project. What prompted you to focus on Little Havana?

Both of my parents were born in Cuba. I grew up in the suburbs of West Kendall, but Little Havana has always held a special place in my life. My grandmother lived there for the first 16 years of my life. Her house was a 1950s suburban house that was made to look like a Craftsman-style bungalow, complete with a faux stone wall pattern, and a porch. Her next-door neighbor was an older Anglo gentleman who lived in a classic wood-frame Florida “cracker”-style house. There were a lot of those around the neighborhood growing up.

At the time I didn’t get the irony of the design of her house, or what it meant in the context of the gradual destruction of the historic fabric of the neighborhood. When my grandmother passed away, I was 16. We moved into her little house in Little Havana, and my love affair with Little Havana only intensified.

It was only later when I came back from college that I really connected the dots between what I loved about Little Havana and these quirky little houses. The character of the historic buildings was such a big part of my mental image of the neighborhood, but it was only when I returned to find that they were being demolished at an accelerating rate did I truly appreciate what they meant.

Since then, I’ve studied and advocated for ways to preserve much of what makes the neighborhood unique, from an architectural perspective, while also allowing it to continue to evolve. There is this tension between the perceived need to redevelop the neighborhood—which in the mind of many means erasing what is old—and acknowledging that what is being erased is a large part of what holds value for this neighborhood.

That’s where my CINTAS project comes in. I know that there is a balance to the ongoing evolution of the neighborhood, and the preservation of the architectural heritage that contributes to its character. My project seeks to tell the story of the bungalow, from its humble origins as a primitive building type to its role as the first American home for a generation of Cuban immigrants, and beyond.

At the same time, Little Havana is so close to downtown Miami that there is tremendous development pressure to increase density here. The Miami Bungalow Project seeks to identify ways that the spirit and character of the bungalows can be preserved in their scale and relationship to the public realm, while accommodating the pressures of increased development demand.

Tell us what’s special about bungalows.

What makes the bungalow building type so special is that it respects the street in a way that contemporary buildings don’t. Their use of a porch was similar to a variety of Cuban building types. In a small way this made the transition to American life that much easier for many. Still today, you can find a handful of older Cuban folks who sit on their porches and have their cafecitos and watch the world pass by. The new buildings completely lack this social quality, and that is something we are trying to capture in our CINTAS project.

The Bungalow Project seeks to show how these fundamental qualities can be applied to new buildings, or retrofitted buildings, while still providing an increase in density that will release the pressure to demolish the bungalows and build structures that have no connection to this specific place or the public realm.

What form is the CINTAS project taking? What’s the goal?

We wanted to tell both the story of the bungalow throughout history and our solution to the Little Havana challenge of development pressure versus character and social cohesion.

We settled on a series of postcards that will show the bungalow throughout its history, leading up to modern day. We’ll show the primitive bungalow, through its democratization and adoption in America by companies like Sears, to its demolition and adaptation in Little Havana.

The series will finish with a set of design proposals for how existing bungalows can increase their density without sacrificing their character, using low-cost materials. Or how the surrounding 1960s apartment buildings can learn from the bungalow in their relationship to the public realm.

All of these will be part of an exhibit with the Dade Heritage Trust, and we’ll work with local developers to try to implement some of these ideas with low-cost building elements.

What’s the timetable for the project? Where are you in the process?

We’re in the middle of drawing the proposals. Part of what connects our designs to the character of the bungalow is that we are hand-drawing all the pieces. So much of what made the bungalows great was the human-scale design and the designs drawn by hand. That texture and quality of design is something you only really get through hand drawing.

The best-case scenario is that we raise awareness of one of the things that makes Little Havana special, and we convince a developer to build one of our designs. Ideally, that leads to changes in the city zoning code that will protect the existing historic fabric, while at the same time allowing the neighborhood to develop and increase its density.

Have you been to Cuba?

My thesis at NYU was on Cuban modern architecture, so I’ve always had a passion for the buildings there and wanted to see them at some point. I finally had the opportunity to go, and went for two weeks to see all the buildings I’d studied. I didn’t know what to expect. The thing that most struck me was how warm and loving and cariñoso everyone is.

I walked around everywhere, from one side of the city to another. The mix of the modern and the old—the normal fabric of the neighborhood—was so satisfying to me. My favorite architects from that era were Max Borges and [Mario] Romañach.

I also went to my grandfather’s house, a 1920s house in Santos Suarez. I knocked on the door and spoke to the people who lived there. The house was in great shape. There was a pride of stewardship of that space.

Did the trip to Cuba influence your practice?

It reinforced my feelings on walkability and good urbanism.

I think it’s important that all Cubans, both those living in exile and on the island, are able to reconnect. And that the descendants of the exile community are able to return to the island, if only for a short time, to renew and strengthen that spirit which makes us Cuban.

A Triennial in Italy looks at Havana’s National Art Schools